Posted by Laura Gibbs
A year ago (or more...?), I read a very inspiring post about online-sharing stories at Alan Levine's awesome CogDogBlog blog, and I knew right away what story I should tell, but time ran away from me. And I did not write it up. And it's not even exactly about OERs because I don't really think in terms of OERs. But Alan is flexible on that as you can see here in his comment on my previous post ... and this is a story I've always meant to write down somewhere. So, here's the story.

Well, someone who seeks Latin proverbs and mottoes on the Internet finds me pretty quickly, and I get a lot of wild email as a result. In particular, I get a lot of emails about Latin tattoos.  It's important to check on the grammar of a Latin tattoo before you actually get tattooed, especially if you used Google Translate to generate the Latin. Here's why: Quod scripsi, scripsi. "What I have written, I have written." That DEFINITELY applies to tattoos.

Anyway, I really enjoy consulting with people about their Latin tattoos, and I always ask them to send me a picture of the result. In all the years I have done that, so far only one person has actually sent me a picture, and I am so grateful to him! Here is his email to me: "I was deployed for 16 months to Afghanistan, during which time I became very close to a guy who was over there with me. I am now in the process of getting out of the army yet he has another deployment to face. We want to get a roman themed tattoo to match but I am having trouble finding an accurate translation of Brothers in Arms. Could you please help me find an accurate translation of the phrase I would greatly appreciate it."

And here is his tattoo: INTER ARMA FRATRES. Doesn't it look super? I would say that is technically an emblem since he chose a great image to go with the text: 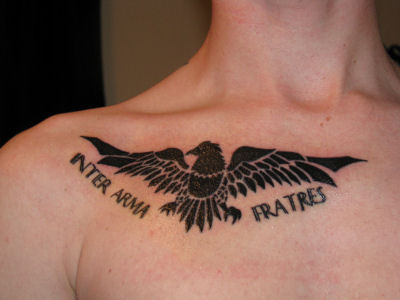 But that's not the story I want to tell. The story I want to tell is a little different and, because it is from at least seven or eight years ago, I don't have the email exchange to supply details. The gist of the story, however, is this: I got an email on what must have been a Friday, late on a Friday. It was really abrupt, to the point of rudeness. More or less: "How do you say ____ in Latin? Write me back NOW please. It is important." And that was about it.

So, I pondered what to do. People who know me know that I am pretty cranky. The best way to make sure that I will NOT do something is to tell me that I MUST do it. But the phrase was an intriguing one (I wish I could remember what it was now!), and so I wrote back a few possible Latin translations and some comments on each one.

Whatever. It happens a lot.

But then... a few days later, early the next week, I got a heartfelt email, several paragraphs long. It turns out that the person's father had died, very sad stuff. Long story short: they needed the Latin because the father wanted it on his tombstone in English and in Latin, but nobody could find where he had written down the Latin, and they wanted to make sure they included his chosen words in the memorial service also. They had already tried contacting various Latin professors in Australia (where they lived), but no one had replied, so they had found me online and had written me in desperation at the last minute. And they were so grateful, etc.

Wow. WOW. As you can imagine, I was very glad I had repressed my cranky self and replied promptly to the email. It made me cry, but a good kind of cry.

Just recently, I received another, similar request, and it also made me cry. Since this happened just a few months ago, I still have the email; it is from someone in the Netherlands. As you will see, he found an old blog post of mine from back in 2007 about a Latin phrase. Here is his email: "In reference to nulla dies sine linea, something you wrote about back in 2007, I have a question and perhaps a request for some advice. My father, a biomedical engineer / language nut (latin, greek, ancient hebrew)  / prof at UPenn and above all a theoretical scientist has asked me to suport his thinking for a suitable, but brief preferably ancient statement for his tombstone. He is terminally ill and enetering the final phase. I had suggested nulla dies sine linea but had, based on my reading at that point, presented its intent as less literal - let no day pass without a thought as being suggestive of the intellectual or artistic work more than just the pragmatic. Faced with the need to finalize the choice, and having read you on line: is the less literal translation unsuitable in intent or usage? if unsuitable, are you aware of a similar (short) phrase touching on the same intellectual suggestion?"

Here is what I wrote back: "Your generalized interpretation of Nulla dies sine linea is indeed how the line is commonly understood, so it would be a perfect memorial. In the original context, it referred to painting (i.e. strokes of the brush, which were lineae, lines in Latin), but over time it has been taken to refer to writing (as we still use the word lines), but also any kind of thoughtful endeavor. It is a beautiful sentiment, clear, easy to understand, powerful."

Of course, his kind email made it easy to write back. But I learned my lesson the first time: if someone tells me their Latin need is urgent, I need to take it seriously, even if their email is abrupt.

Meanwhile, I had always considered Nulla dies sine linea to be a perfect motto for bloggers. And now I am glad to think that it was also able to serve an even more important purpose in helping to convey the special quality of a person's life.

So........ keep on writing, everybody! And share what you write online! You never know what GOOD THINGS might happen as a result.

Want more? You can find some wonderful video stories about online sharing that Alan has collected here: True Stories of Open Sharing. And if you have a story to share, tell Alan!!!


Nulla dies sine linea.
No day without a line. 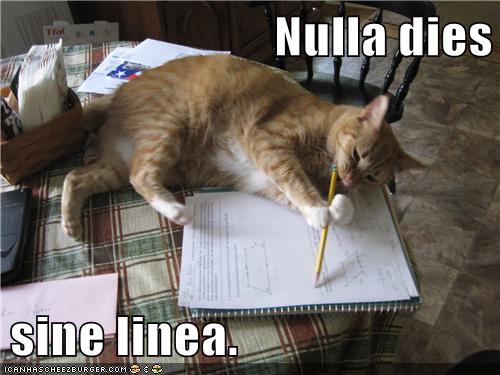 
Email ThisBlogThis!Share to TwitterShare to FacebookShare to Pinterest
Labels: Cheezburger